The structure of the respiratory system 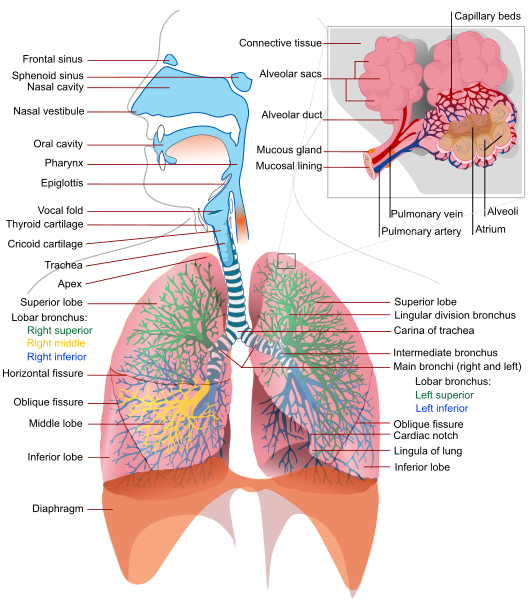 You need to recall the structure and function of each component of the respiratory system:

Air comes into the respiratory system through the nose. The air is filtered in the nostrils due to the presence of small hairs. It is also moistened and warmed by the nasal cavities and the mucus present traps foreign particles which are then propelled towards the throat by the cilia on the epithelial cells.

From the nose, the air passes into the pharynx and is drawn into the larynx and then the trachea. The epiglottis is found within the larynx. This structure prevents food and drink passing into the respiratory system. When swallowing, the larynx is pulled up and the epiglottis flaps back to block the entrance of the larynx.

The trachea contains C-shaped cartilage rings which prevent the tube collapsing due to the change of pressure. It divides into 2 tubes with smaller diameter called bronchi. Each bronchus is lined with ciliated epithelia to waft mucus upwards towards the throat. There is asymmetry in the respiratory system - the right bronchus is bigger than the left one and at a more vertical angle. This makes it a common site for inhaled foreign bodies.

The bronchi further divide into bronchioles. These are important because their diameter can be controlled by smooth muscles contraction or relaxation. The bronchioles terminate with alveoli (100µm in diameter) which are the site of gas exchange.

The process of breathing in and out is known as ventilation. Breathing in (inhalation) relies on air being drawn into the lungs because the air pressure in the lungs is lower than that in the atmosphere. This lower pressure is created by the contraction of the diaphragm and the external intercostal muscles. This flattens the diaphragm and moves the ribs up and out. The volume of the thorax therefore increases, decreasing the pressure and allowing air to enter into the lungs. 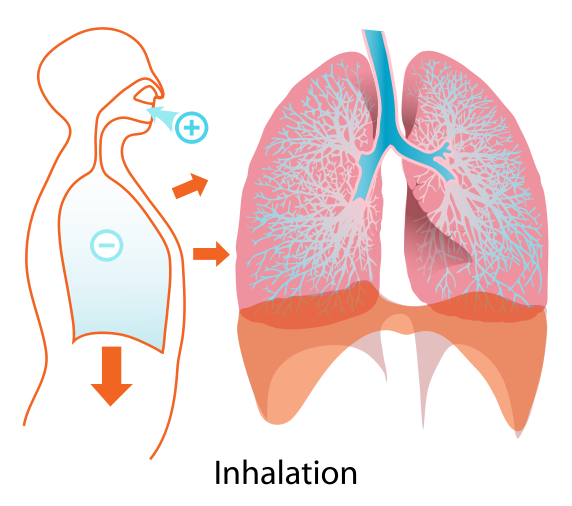 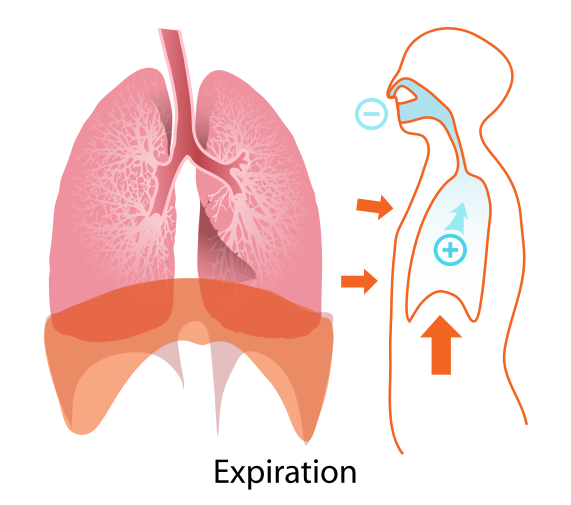 Fick was a busy man, he has both a law and a principle named after him AND is credited with the invention of the contact lens! Fick’s law states that:

The rate of diffusion across a fluid membrane is proportional to (surface area x conc. difference) / distance

It seems that Henry was a master of stating the obvious! Let’s try to further understand the process of how oxygen moves across the alveolus and into the blood.

The alveoli - the site of gas exchange in the lungs is composed of epithelial cells. This has evolved to allow efficient diffusion of gases (large surface area short diffusion pathway) down their concentration gradients. O2 therefore diffuses from air to blood where it then associates with haemoglobin and CO2 diffuses from blood to the air in the alveolus.

A protein called surfactant is produced by the alveoli, which prevents the alveolar surfaces from sticking together when they deflate. The alveoli also contain phagocytes to kill bacteria that have not been trapped by mucus which may later cause disease. 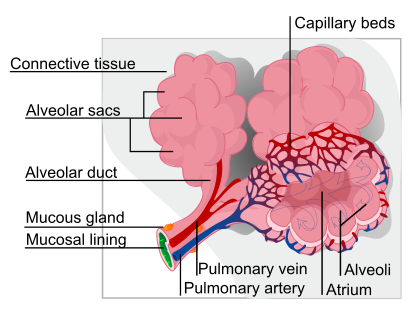 There are many different conditions which can impair the function of the lungs. Obviously with such an important role, any harm done to the lung tissue can have major effects on a person’s health and fitness. With such a clinical focus, this is a key area of ‘How Science Works’ and you should be able to analyse data for correlations and causal relationships between human activity/behaviour and the onset of disease.

At least one in ten people suffer from asthma at some point during their lives with the majority of cases presenting in childhood. The condition is caused by inflammation of the bronchioles. In an asthma attack:

Asthma attacks can be triggered by many different stimuli. Common triggers include:

There is no ‘cure’ for asthma but the condition can be treated and managed through the use of inhalers which administer drugs to the respiratory system. Normally an asthma sufferer would have two inhalers to be used in different ways. They will have one ‘Preventer’ which when used release anti-inflammatory drugs such as steroids to reduce the underlying inflammation and hopefully reduce the likelihood that a person will have an asthma attack. They will also be given an inhaler which should be used to relieve symptoms during an attack. This contains substances which dilate the bronchioles which should make breathing easier.

Fibrosis is the scarring of body tissue in this case - the lungs. The scarring causes a loss in elasticity of the tissue between the alveoli and contorts the bronchioles and alveoli. These pathological effects reduce lung capacity. The condition is highly linked to occupational hazards such as working with substances such as asbestos, coal dust and metal dust. Widespread fibrosis caused by inhalation of harmful substances is called emphysema. Infectious diseases such as tubercolosis can also leave small regions of the lungs with scarring. Fibrosis therefore refers to the consequence of diseases which produce lung damage.

A patient suffering from pulmonary fibrosis would have shortness of breath and/or a cough. At present there is no treatment for this condition and a lung transplant is the only treatment option which will improve long - term survival.

It is especially common in communities where living space is relatively small or crowded working environments. There are some countries in which TB is particularly prevalent and anyone moving to Britain from these countries will need to be tested for the bacteria before being allowed to enter the country without first being treated for TB.

People most at risk of contracting TB are those who:

Once inside a person’s respiratory system there is a plentiful supply of oxygen allowing rapid growth and division of the bacteria. At this early stage the person often develops pneumonia. The white blood cells of the immune system respond rapidly to the infection to try and prevent the bacteria from spreading. This process results in the formation of scar tissue which contains the infection in an inactive state.

If the body’s immune system becomes weakened the TB bacteria can break through the scar tissue resulting in the return of pneumonia and the spreading of the bacteria to other parts of the body (the kidneys, bone and linings of the brain and spinal cord are the most common sites affected).

There is a relatively long time between the time of infection and the onset of symptoms. A patient will present with tiredness, weight loss, fever, coughing, chest pain and shortness of breath (this is due to the presence of scar tissue in the lungs).

Inactive TB may be treated with an antibiotic and active TB will usually require several antibiotics to combat the infection.

Emphysema can be an inherited condition but most cases arise as a result of smoking. The toxins passed into the lungs when smoking trigger an immune response which ultimately leads to the destruction of the lung tissue.

Your lungs contain white blood cells which ‘patrol’ the lungs phagocytosing any harmful pathogens or particles which are inhaled. These phagocytes release enzymes which catalyse the breakdown of proteins found in the connective tissue between the alveoli and bronchioles. This makes it easier for them to move around the lung tissue to engulf and kill the invading pathogen or particle. Elastin is one of these proteins which phagocytes destroy. The elastin fibres act as an elastic band would, snapping back into shape after they have been stretched. This allows the stretch and recoil of the alveoli (the site of gas exchange).

Excessive destruction of elastin is normally prevented by the production of a substance called α1-antitrypsin which acts to prevent the action of elastase (the enzyme which catalyses the breakdown of elastin). The smoke from cigarettes contains several chemicals which stop lung cells from producing α1-antitrypsin. This means, that the destruction of elastin will increase, damaging the elastic tissue of the lungs making it harder for a person to exhale. Other proteins are also destroyed by the enzymes secreted by the pathogens meaning that the alveoli walls can be damaged and the surface area available for gas exchange is reduced.

A reduced area for gas exchange means that a person with emphysema’s blood will contain a reduced concentration of oxygen. This will limit the amount and rate of aerobic respiration achievable by their cells making any activity a great effort.