When learning about the structure and function of the heart, it is useful to have a labelled diagram close to hand. Even better still would be to get to a butcher or supermarket and buy a lamb heart and investigate for yourself! 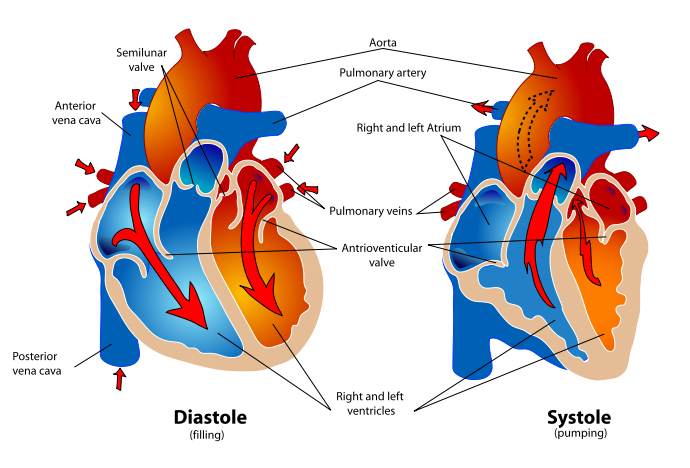 It is also worth looking for animations of the cardiac cycle on the internet to try and give you an image of how this organ functions.

Until you are comfortable with the structure of the heart, it will be very difficult to understand HOW the heart works. You should be able to identify the following structures:

The four chambers of the heart are continually contracting and relaxing in a sequence known as the cardiac cycle. Contraction of a chamber is SYSTOLE (pronounced sistolee) and relaxation DIASTOLE (pronounced diastole). The left and right sides of the heart actually contract simultaneously but in order to understand how blood moves through the circulatory system we will consider each half separately.

TASK: using a simple diagram (boxes will do), draw arrows showing how the blood moves through the chambers and blood vessels.

A common exam question at both GCSE and A Level is why is the muscle of left ventricle is thicker than right ventricle? If you’ve done a heart dissection at school, this will certainly be something which the teachers pointed out and there is in fact a considerable difference between the two chambers. The reasons for this are outlined below:

The problem of backflow:

At several points so far, pressure has been mentioned. It is an important aspect of the cardiac cycle and a factor which can be used to identify which stage of the cardiac cycle a heart is in. In fact, examiners love to provide you with pressure graphs and ask you to analyse the cardiac cycle. It is therefore worth us spending a little time going over the principles of ‘Isovolumetric contraction’ - it sounds worse than it is!

All good text books should have a pressure graph for you to look at and try to understand how the pressure changes relate to the cardiac cycle.

Electrical Activity of the Heart - Controlling the Cardiac Cycle

The heart has a unique ability to beat (contract) on its own. The cardiac muscle cells are therefore myogenic. Regulation of this contraction though is required to ensure that the muscle cells contract in a specific way and that your heart can respond to meet the energy demands of your body. Nervous and hormonal stimulation both have an effect on the way that the heart contracts.

On the right atrium is a structure called the Sinoatrial Node, or the SAN. This bundle of cells acts as a pacemaker controlling the rate of contraction - the heart rate. Stimulation of this node initiates a wave of electrical impulses which spread aross the atria causing atrial systole. If cardiac cells are stained with a voltage sensitive dye then a wave of contraction can be seen rippling across the atria (all muscular contraction relied on electrical changes).

The electrical signal in the atria is picked up by a second node, the AtrioVentricular Node (or the AVN) which passes the signal down to the apex of the heart (bottom of the ventricles). This is passed through specialised conducting cardiac muscle fibres called the Bundle of His. From the apex, the electrical activity is spread throughout the ventricles along Purkinje fibres. This means that the ventricles contract from the bottom up once they have filled with blood.

You may have heard the terms fibrillation or VF (ventricular fibrillation) on TV shows or films. This refers to changes in the electrical activity of the heart muscle cells. Fibrillation occurs when the cells are not contracting in a regular fashion which, if it’s happening in the ventricles will mean that blood is not being forced into the blood vessels.

QUESTION: How and why would using a defibrillator help in this situation?

Pulling it all together

You should now understand the following things:

TASK: Test your knowledge by rearranging the following statements into a logical order!